Steven Kozar of Messed Up Church takes on the New Apostolic Reformation (NAR).  You will come away from reading his piece with no doubt in your mind as to why this is such a dangerous movement and why discernment bloggers continually warn of the pitfalls of the NAR. I for one have been warning my readers for over a decade.  Thus, I can attest to the fact that NAR leaders are, as the late Ken Silva so aptly put it, wing-nuts.  And that’s not name calling.  That is a fact.  Take it from one who’s been researching/reporting on these people since they first managed to infiltrate the Christian Right.  Many of you will find this hard to believe, but the pro-family movement is literally teaming with wolves.

But what you’re about to read has nothing to do with the Christian Right and undiscerning pro-family leaders.  It’s about a growing movement that’s at the root of the collapse of evangelicalism.  In this must read piece, Steve Kozar brings to light the reasons this movement is considered dangerous; likewise, he shows the effects it’s unbiblical teaching has had on those who become a part of it — and it’s not pretty. Steve makes if very clear why professing Christians mustn’t involve themselves in any aspect of the bizarre, unholy, mystical movement that has hijacked evangelicalism.  It’s not Christian.  It’s not of God. It’s a theological cult. And its leaders are wolves!  Run!! 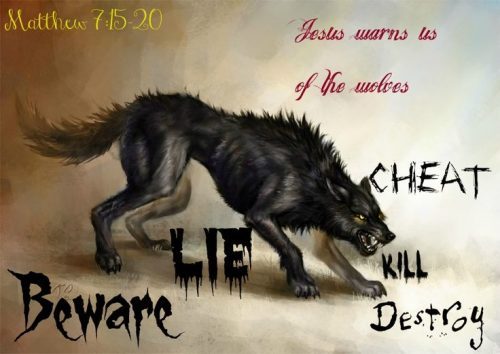 If you’ve been a part of a church that adheres to some of the “New Apostolic Reformation/Signs and Wonders” , there’s a good chance that you have nagging doubts and concerns that keep popping up from somewhere in the back of your mind.

For example, you’ve been told something like this: The Christian who gets baptized in the Holy Spirit, speaks in tongues and then… jumps aboard the hyper-charismatic NAR/Signs & Wonders bandwagon, will get a bunch of things that “regular” Christians don’t have. You’ve gone to a lot of services, conferences & revival meetings so you can get “the anointing,” and you’ve read a lot of “anointed” books and watched a lot of “anointed” TV and video presentations. And now you’re supposed to have more. More blessings; more power; more prosperity; more confidence; more effectiveness; more intimacy with God… on top of that you’ve been taught to keep asking God for more because God is waiting to see how hungry and desperate you are before He does anything more.

But admit it, you don’t really have more of those things. In fact, you probably have more questions, more confusion, and more doubts.

On top of these personal difficulties and inconsistencies, you’ve watched men and women who were supposed to be great spiritual leaders prove themselves to be regular sinners with all of their divorces, financial scandals and confusing teachings that seem to get made up on the spot. These are the people who claim to have great power because they get “built up in the Holy Spirit” by speaking in tongues, and they know the secret key to “resist the devil” and get radical results. Bill Johnson even claims that he can change the atmosphere of a room just by walking in the door. They know exactly how to brag about their amazing walk with God while maintaining a facade of humility.  Continue reading

NAR Prophets claim the three streams will be one
Leaving the NAR Church: Erin’s story

One Response to The Hyper-Charismatic House of Cards: Let It Fall and Be Free