“I saw what I was doing as a band member as not leading people in worship, but participating in ‘conjuring’ the Holy Spirit to ‘come down’.  The Holy Spirit being defined as the euphoric feeling that the droning music creates.“

As you’ll learn from Glenn, oftentimes NAR (New Apostolic Reformation) teachings filter into churches by way of worship music.  While contemporary styles can glorify Christ, there are certain methods musicians like Glenn are taught to use repeating phrases, musical tones, and ethereal lyrics designed to seductively manipulate your mind into a mystical consciousnesses.

This is Glenn’s story in his own words: 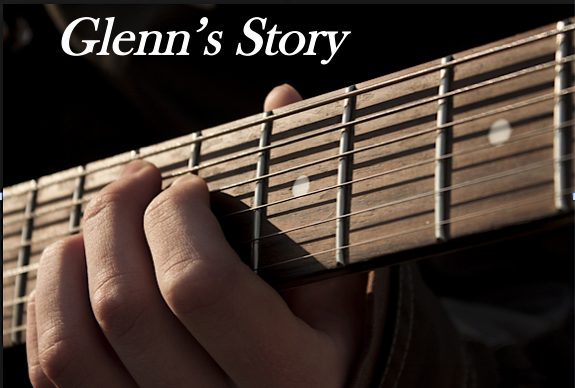 I grew up in a Christian home attending a Pentecostal church growing up.  Living in Saskatchewan Canada, the Pentecostal denomination is quite large.  While the truth of Scriptures was emphasized at home, the church I was a part of was always looking for the evidence of speaking in tongues and being “slain in the spirit”.

To move forward to my involvement in an NAR church, in the 90’s, the “worship music” industry was gaining popularity and music was a big passion at the time. The “worship wars” in the church for music styles ended by this time, and contemporary/rock won out over traditional music.

From 1998 – 2004 I was a part of an inter-church, city-wide worship team that included members from a Lutheran and two Pentecostal denominations.  We organized a monthly event at the local University theatre as an outreach.  Secular pop songs were mixed with modern worship songs to draw in young adults from a variety of backgrounds.  From my perspective at the time, it was fun participating in a large monthly concert event that was seemingly drawing in hundreds of people to hear the Gospel.

As numbers started to dwindle, the program was moved to monthly events at participating churches and eventually drew to a close.  Looking back at this era, I’d be far more critical of the message being preached and other details, but at the time, trusted in the goals of those sponsoring and leading.  There was no push back of the event from those in the band or those supporting it.

This was my connection to the NAR-leaning church.  I was drawn in by what the Bible would call “works of the flesh”. Playing electric guitar in what was essentially a rock band, receiving accolades and praise from the crowd as well as leadership for a “job well done” is very enticing.

To improve my craft as a musician, I was listening to a number of rock guitarists who have blatant occult influences. At the time, I saw no contradiction with this while being in a worship team.  All members of the teams I played on received their musical influences from a variety of secular sources.  Ironically, as I was at the height of popularity within the local church bubble, I would have been the furthest away from God due to my musical influences.  At this time I wrote a book on using secular music as a tool to improve skills as a worship musician.

Around 2008 the pastor in charge of worship was promoting “Jesus Culture”.  I remember being very uncomfortable with the name of the band, and this was the first step in waking me up.  I didn’t see the music I was playing as being part of a culture that honors Jesus.  It was a rock band that brings attention to the musicians.  I didn’t start to back out at this time as I was having fun. There is a lot of camaraderie amongst the band members, and my social circle revolved around music.

Over the next year, I desired to learn more about the Bible as this was lacking in the sermons.  As I was absorbing lectures from Ravi Zacharias and William Lane Craig, I was looking at the worship program from a more critical eye.  There were two Sunday services – contemporary and traditional – for adults, while the Saturday night service was geared for the young adults.  I wasn’t comfortable at the Saturday night service as it seemed to be getting “weird”.  It wasn’t just that the worship teams had a large platform as a rock band would generally be regarded, but the atmosphere the teams were creating was the thing that was worshiped.  People from all over the city were drawn to these Saturday night events where the music was the central focus.  The music created an atmosphere that was worshiped as the “Holy Spirit coming down”.

The trend coming in from a musical standpoint wasn’t simply more skillful musicianship, which was something I wanted to pursue and hear, it was the “encouragement” of guitar players and keyboards to use more delay, phasing effects and droning effects by continually playing the same two notes repetitively.  This trend started to push me away as I thought it enabled sloppy musicians to be a part of the program if they blindly follow direction.  The younger musicians gladly got onboard with this while I was not too happy.  I was not comfortable with what the younger musicians were being taught in regards to simply accepting the pastor’s direction without question.  This devotion being promoted was a second step to push me away.

As at this point, I was beginning to be the “older guy”, and I didn’t like what I was seeing.  The music wasn’t just singing Chris Tomlin and Paul Baloche cover songs, it was manipulating the length and order of these songs to stretch to crescendos and lows to create an atmosphere.  The more the songs were brought up and brought down by the leading of the front man, the congregation would respond with swaying, raising hands and zoning out.

Members of the leadership team were taking trips to Bethel in Redding, California, to attend the Supernatural School of Ministry. They were also promoting the International House of Prayer (IHOP) 24-hour prayer practiced.  I was starting to research Bethel, IHOP, John Crowder and others associated with the NAR.  I didn’t want to be a part of this direction the church was now going. I felt more of an outsider that came to play in the band, have coffee during the sermon in the church lounge, and stay home the weeks I wasn’t scheduled.  During my time away, I was researching the NAR, Bethel, and IHOP from a variety of sources.  An impacting source was Andrew Strom’s YouTube video on Kundalini, and Caryl Matriciana’s documentaries on Eastern Mysticism. These pushed me to not only get into apologetics, but into a larger study of the Bible, spiritual gifts, and how they apply today to the believer.

My third wake-up point was connecting what I was seeing with the direction of my church lining up with Andrew Strom’s observations.  I saw what I was doing as a band member as not leading people in worship, but participating in “conjuring” the Holy Spirit to come down.  The Holy Spirit being defined as the euphoric feeling that the droning music creates.

I didn’t leave right away, but delayed as the musicians in my team were friends and I didn’t want to just abandon them.  I kept my thoughts to myself at this point, as there is a clause in the membership agreement to not speak against leadership.  I hoped things would turn around, but it kept going down this road.  I was encouraged to go to Bethel to “experience” their “worship”, but I declined.

The final straw was the church bringing in a faith healer named Joan Hunter.  During the worship set, the pastor demanded the Holy Spirit to come down.  Joan Hunter was selling items to enable people to have babies, receive healing, etc.   I saw her as a complete fraud, and saw that the church I was a member of had no problem promoting this.

Joan’s audience was eating up everything she said, with displays of emotion and praise. However I saw a fraud making money off of hurting people.  I was infuriated, and that was the last Sunday I was there.  I met the worship leader of the band for coffee and explained why I was leaving.  He understood and wished me well.  I next explained my concerns to the worship pastor, who was once the worship leader of the city wide praise band we were a part of years before.  He also understood my reasons for leaving, and wished me well.  No changes were made after my departure.

Leaving was not easy.  I was looking for every reason to stay.  Leaving wasn’t simply leaving, it was coming to the conclusion that what I’ve chased so passionately in regards to musical skill was in vain.  It was coming to the conclusion that I wasn’t using music to worship God, music was being used to bring worship to the band and create an atmosphere of euphoria that was referred to as the “Holy Spirit”.  It was all false, and that’s a difficult pill to swallow.  There is no conspiracy of musicians to hypnotize the congregation and join in hands with Babylon, but that’s in fact what is happening.  The musicians are pawns in this game, and the leadership of most churches are also pawns.  They believe they are following God, but they’re not.  They’re following an experience.  They need prayer.

I’ve read many accounts of spiritual abuse from those who have come out of NAR churches. I saw no abusive situations in this church, and have nothing disparaging to say about those I know there.  The people who go there are deceived through emotion to accept an ecumenical convergence with the Vatican, as this is the road Bethel is on.  While most of my friendships with those who attend this church have moved on, it’s more a case of changing social circles, superficial relationships with those at the church at the time and changing focus.  I’m no longer on the same page as those who were my friends at this church, and there is little to talk about.  I’ve mostly put my guitar away to focus on Bible study so I can’t even relate in regards to musical trends.

After we left this church in, we ended up at a small Baptist church which in fact turned out to be completely dysfunctional, abusive and controlling.  The small Baptist church has textbook sociopaths in leadership while the charismatic church leadership believes they are truly following God.  It’s sad, but they are choosing this path.  I met with an elder from the NAR church this spring at his request to connect.  I informed him of all I learned on the NAR, Bethel, Bill Johnson, Eastern Mysticism and how it applies to the church he’s an elder of.  I asked him to do his own research.  He unfriended me on Facebook after the meeting.

My wife and I are no longer a part of any organized church. We are a part of a small home fellowship and more closely identify with the “dones”.  I write a weekly Bible study for HolyGroundExplorations and feel more at peace since we left “church”.

I’ve done further research since I left and wrote the following two essays on my blog, here and here.

How Does Satan Propagate False Doctrines? THIS Fast
Important questions for church leaders