Posted By Marsha West on February 9, 2017 in Discernment, False Teacher Alert, Women and the Church
Share

Elizabeth Prata of The End Time warns of “IF : Gathering.”  The title comes from the group’s motto, “If God is real, then what?” Prata reveals that, “The purpose statement on their IRS forms is to equip women by having them share their feelings about Bible passages posted online.”

Elizabeth recently penned “If : Gathering: more information, including video claiming direct revelation” where she said this:

The ‘gathering’ part is actually brilliant. They purport to disciple women in gatherings at homes and other locales, sometimes churches. They know where to gather through social media, which is employed in a major way. That’s why their embeddedness and vigorous activity is hidden from view and thus their danger is not readily seen. There aren’t posters, advertisements, billboards, pamphlets. etc. There’s texts, social media whispers, person-to-person promotion, all of it done in a way that is more subterranean than any other generation’s activity.

Satan’s fingerprints are all over this, brethren. So we urge you to bone up on the rapidly growing IF movement because it’s not going away any time soon. 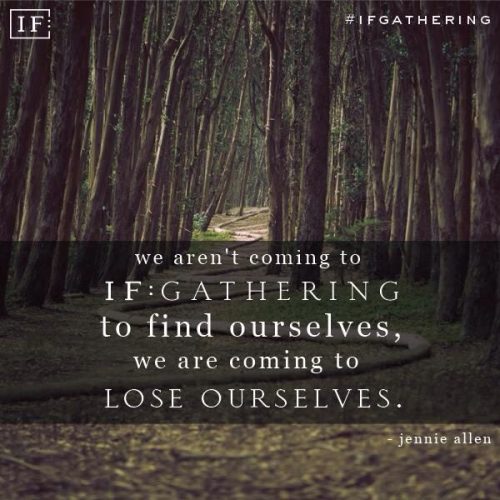 Allen, along with Lindsey Nobles and several other women, started this ‘movement,’ as they describe it, to gather women for purposes of discussing their feelings about the Bible. This is accomplished outside of the auspices of the local church. Several participating IF:Leaders admit they actually abandoned their own ongoing church ministries to do form this non-church organization and focus on the global movement they hoped to incite. Their intentions are full of self-stated hubris. They plan to ‘disciple a generation’. They intend to ‘heal the nations’. They will ‘reconcile the world’. They will ‘unleash the next generation of women to live out their purpose’. And so on. You can read about my concerns with the IF movement here, and here.

IF was born from a direct revelation given by a voice in the sky to Jennie Allen sometime in 2007. The movement perpetuates twisted hermeneutics, unbiblical lifestyles, social justice, and a warped view of the Gospel that is based on doubt. That’s the synopsis of concerns regarding IF:Gathering. That it is unhealthy is to say the least. Please read the previous essays for scriptural foundations supporting these concerns.

Today I want to shift focus and show you in pictures just how quickly satan propagates his false doctrines and unbiblical lifestyles.

The first IF:Gathering was held in February 2014. At this writing, exactly three years have passed since then. The movement has indeed caught on. Its activity is mostly hidden. If you haven’t heard about IF that’s because the gatherings are announced via social media and many of them are private. This activity is all going on out of sight for the most part (aside from the annual convention). Three years ago I’d posted a shocking map that showed how many of these public and private gatherings were taking place all around us. Here is the map showing IF:Gatherings three years ago when it began. Continue reading

One Response to How Does Satan Propagate False Doctrines? THIS Fast