Journalist and media critic Cliff Kincaid reports on an editorial written by Cardinal Donald Wuerl, the Archbishop of Washington, where he goes after the far left for working through the Democratic Party to censor the views of people who believe in traditional values as well as “destroying institutions that convey these values to young people.”  According to Kincaid “not all Catholics are remaining silent. The EWTN Catholic cable channel, which reaches tens of millions of people in the U.S., has been running a blockbuster film, “A Wolf in Sheep’s Clothing,” examining how Marxists have subverted the church from within by recruiting clergy into revolutionary socialist activities that divide people and cause conflict. The film is described as “a lens into America’s cultural Marxism euphemistically called ‘progressivism.'”

Kincaid included a quote by Wuerl where he warned that “the ease with which today a politically correct morality is being forced on our Catholic institutions in place of our own Catholic moral tradition.”

The archbishop’s editorial “should cause headaches among Democrats who think they can dupe Catholics in another election year,” says Kincaid.

Our White Paper on the  Roman Catholic Church examines the doctrines the RCC teaches and demonstrates that it stands in stark contrast with – and even in opposition to – historic orthodox Christianity. 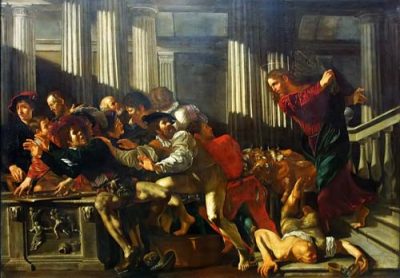 And Jesus entered the temple and drove out all who sold and bought in the temple, and he overturned the tables of the money-changers and the seats of those who sold pigeons. (Mat. 21:12)

Of all the groups that Barack Obama bamboozled in 2008 and 2012, Catholics were the biggest suckers. They voted for Obama, and now, according to the polls, they are backing Hillary. But evidence suggests that some people in the Catholic media are waking up. They are promising not to get fooled again. They could influence millions of Catholics to abandon the Democratic Party in this critical election year.

The Catholic Standard editorial “The Fruits of Silence,” by Cardinal Donald Wuerl, the Archbishop of Washington, may be a signal of what’s to come. It is a strong indictment of the liberal intelligentsia and their “politically correct” mindset.

Wuerl communicates a sophisticated awareness of how the far left uses misleading talk about solving the problem of “discrimination” against various groups in order to force their radical views on society at large.

He writes, “Here is how it works. A legislative body passes a law that says it is illegal to discriminate against a specific group of people and their behavior. This classification of ‘discrimination’ includes Catholic teaching or any requirement concerning behaviors in our Catholic schools. In other words, such laws would find that a Catholic school discriminates when it teaches that taking the life of an unborn child is wrong or that sexual activity outside of marriage is immoral. The charge of discrimination is also directed at Catholic schools when they expect their teachers to support the teaching in words and deeds.”

Without saying so explicitly, Wuerl is describing how the liberals and leftists working through the Democratic Party are not only censoring the views of people who believe in traditional values, but are also destroying institutions that convey these values to young people.

“During all of this drama, an equally constant factor has been the silence of so many Catholics and other neighbors in the community whose voices might have influenced the outcome,” he adds. Those are the Catholics intimidated by – or active agents of – the forces of political correctness. They are the liberal Catholics who don’t believe in what their church teaches on such issues as abortion and homosexuality. They want to see their church transformed into an arm or adjunct of the Democratic Party, which is radically pro-abortion, pro-gay, and pro-transgender.   Continue reading

Is John Piper Disqualifying Himself As A Teacher?
Why don’t you recommend GOOD teachers for a change?

2 Responses to A “money changers” moment for Catholics