Justin Pierce tackles the train wreck known as the Passion Conference hosted by Louis Giglio, pastor of Passion City Church in Atlanta.  Pierce considers Passion “an ecumenical affiliation of some of the worst heretics and false teachers who have ever been associated with the body of Christ.” His accusation will no doubt strike some people as rather harsh.  So this is where the Christian’s discernment skills should come in to play.  The Apostle John admonishes us to “test the Spirits to see whether they are from God.” Why?  Because “many false prophets have gone out into the world.” (1 John 4:1) This includes testing the teaching of our Christian leaders to see if what they teach is biblical. With this in mind, those who wish to “test” Louis Giglio can visit discernment blogs such as Berean Research and Apprising Ministries and do a search on our leaders.  Searching for Louis (Louie) Giglio on AM reveals several blog posts by the late Ken Silva that address Giglio’s egregious and consistent compromise.  “When confrontation appeared he placed his tail between his legs and scampered off the battlefield,” decried Silva.  But hold off on doing research until you’ve read Justin Pierce’s piece to the end. Here it is…. 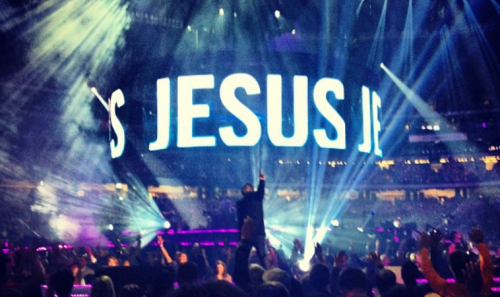 In January 2013 I was informed of a conference that simply everyone who’s anyone was going to. I was even invited to bring our youth along with a local church to the conference. My own children were informed by their friends that all the local church youth groups were going to this conference. We have several large churches very close to us and the best way to describe these churches would be what Pastor Jeff Noblit of Grace life Church Muscle Shoals calls “Six Flags Over Jesus,” I just call it “Circus Church.”

These churches have huge youth groups that appeal to the experiential desires of the local community, and so their selling points are carnal. “We have an X-Box in every room.” One has a giant playroom that would give Chuck-E-Cheese a run for their money, and one even has circus animals to attract the kids. So when my children came to me and told me that they were invited to attend this wonderful, exciting and life changing conference, free of charge, I decided to look into the conference and into the speakers that were teaching at this conference.

It didn’t take long to see huge doctrinal, theological and Biblical problems. After just a few minutes on the website of the “Passion Conference,” as I looked at the biography of the teachers, I realized that this was an ecumenical affiliation of some of the worst heretics and false teachers who have ever been associated with the body of Christ. But, what broke my heart is that a historically aberrant and fringe group of false teachers, like the New Apostolic Reformation, health, wealth and prosperity, and other Hyper-Charismatics are now accepted and honored as mainstream Biblical Christianity. And our churches who are sorely lacking in discernment are gladly promoting these false teachers and sending children to the slaughter.

The main promoter of the conference, Louie Giglio, reportedly gave every person at the conference a brand new study Bible which he produced called “The Jesus Bible.” When introducing it, he tells the audience that “the Holy Spirit helped him and his team write it!”  You can watch the video and hear him say this at the 6:12 mark, HERE.

For those who don’t know, the Holy Spirit only inspired the words of the original Scriptures according to 2 Peter 1:20-21: “knowing this first of all, that no prophecy of Scripture comes from someone’s own interpretation. For no prophecy was ever produced by the will of man, but men spoke from God as they were carried along by the Holy Spirit.”  This is not a minor issue and I am not trying to nit pick, but what Scripture teaches directly refutes Louie’s statement that the Holy Spirit helped his team (including Giglio, Max Lucado, John Piper, Randy Alcorn, and Ravi Zacharias) write their own interpretation of Scripture.

To be clear about this 2 Timothy 3:16-17 in the KJV says “All scripture is given by inspiration of God, and is profitable for doctrine, for reproof, for correction, for instruction in righteousness:”  Every word of Holy Scripture is given to us by God and the very words were Divinely inspired. That is why the historical position of the entire church has always been that we believe in the doctrine of the Divine Inspiration of Scripture in the Originals, not in the copies.  This is very important and a denial of it is heretical for, without adherence to this evident Biblical truth, anything that anyone writes could theoretically be added to Scripture just as the Jehovah’s Witnesses and the Mormon cults try to do.

Louie Giglio is no hero to be admired by Ken Silva

Evangelicals should be deeply troubled by Donald Trump’s attempt to mainstream heresy
Are all doctrines equal? Or are some primary and others secondary?

5 Responses to Passion Conference: A Pastor’s Perspective on The Importance Of Truth and Standing Against Apostasy