Posted By Marsha West on October 10, 2015 in Alcoholics Anonymous
Share

Most people are unaware that A.A.’s co-founder Bill Wilson received the details of the 12 Steps through spirit dictation.  John Lanagan of My Word Like Fire has taken the time to research A.A.’s beginnings. Following is only a smidgen of what he has uncovered over the years: 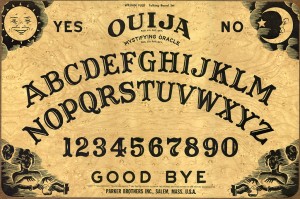 It’s too late. Alcoholics Anonymous has served its purpose. That purpose has been to weaken the church, dilute the theology of Christians exposed to the 12 Step religion, and to point unbelievers away from Christ.

Through A.A. and other 12 Step groups, millions of Christians have placed Christ in a modern day pantheon, a temple of many gods, and have become used to worshiping with non-Christians. (2 Corinthians 6:14-17)

“As for the person who turns to mediums and spiritists, to play the harlot after them, I will also set My Face against that person and will cut him off from his people.” (Leviticus 20:6)

Alcoholics Anonymous co-founder “Bill Wilson believed in spirits. There is a ‘spook’ room downstairs in Stepping Stones where he, [wife] Lois, and other like-minded recovering alcoholics tried to visit the spirit world and communicate with the dead. The archives have folders of the automatic writing he did when he and Lois would use their Ouija Board to invite the spirits to join them.” (Susan Cheever, My Name Is Bill, p. 157)

“There shall not be found among you anyone who makes his son or his daughter pass through the fire, one who uses divination, one who practices witchcraft, or one who interprets omens, or a sorcerer, or one who casts a spell, or a medium, or a spiritist, or one who calls up the dead. (Deuteronomy 18:10-11)  Continue reading
DOWNLOAD OUR RESEARCH PAPER ON THE OCCULT-SORCERY

Heartland fury as university renovates chapel to accommodate Muslims
Binding and Loosing: A Biblical Perspective on a Popular Modern Practice

15 Responses to The occult practice of automatic writing and A.A.’s twelve steps