A couple of days ago we posted this story (here) and it went viral. We later posted a video of Creflo Dollar actually dancing around on dollars (here).  She lamented that, “when I saw that someone captured yet another horrific, blasphemous lie on social media this morning, I just about fainted:  ‘Jesus bled and died for us so that we can lay claim to the promise of financial prosperity.'”  Amy was right in saying that this is a blasphemous lie.

Well, the prosperity preacher is digging in his heals, as you will see in this piece over at Christian Today.  Mark Woods has the latest as well as Dollar’s theological position: 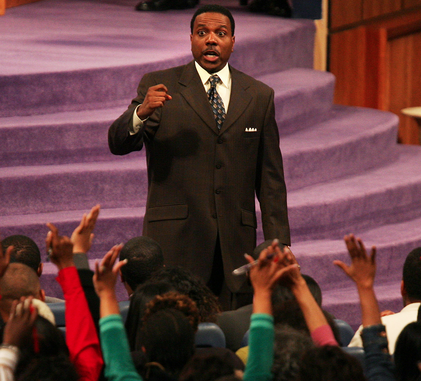 The content of a tweet by controversial US prosperity preacher Creflo Dollar that drew widespread condemnation and ridicule before it was hastily deleted still appears on his website.

Dollar, who won notoriety by his request to his followers for $65 million for a new top-of-the-range private jet, tweeted: “Jesus bled and died for us so that we can lay claim to the promise of financial prosperity. #ProsperityInChrist #WealthyLiving #AbundantLife”.

The tweet was deleted but was copied and widely shared, mainly by those outraged at what they regarded as a perversion of Christian teaching.

However, on the Creflo Dollar Ministries website exactly the same statement is made as part of a longer justification for his theological position.

The statement continues: “He took our sins upon Himself and exchanged them for His righteousness so that we could become enriched and abundantly supplied (2 Corinthians 8:9, AMP).

“Because of the cross, we have a blood-bought right to be abundantly supplied.

“God will take care of us even more than the birds of the air, which neither sow nor reap (Luke 12:24).

“All we need to do is trust in Him enough to tithe and give offerings.”

Linking the death of Christ with material wealth is regarded by mainstream pastors and theologians as a serious theological error, if not as an actual heresy. Most would see it as a blatant adulteration of the gospel by consumerism and greed.

The World is Coming to an End — Now!
Should Type-R Charismatics Get A Free Pass?