In this piece Lee Duigon, contributing editor with the Chalcedon Foundation, laments over what he refers to as the Satanization of  America. “It’s time we had great big statues of the Devil in all our major cities,” says Duigon.  “We might as well be honest about who we are, or who we’re turning into.” 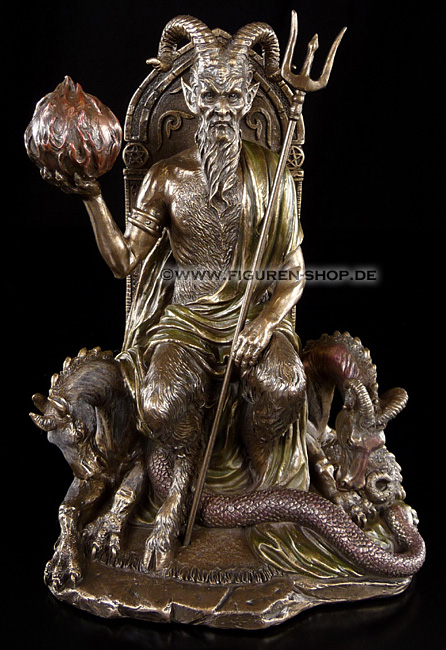 We keep piling it on. Same-sex parodies of marriage, men insisting that they’re women, selling parts of babies slaughtered in the womb, politicians demanding austerity from us as they zoom off to Davos in their private jets—this is supposed to have no effect at all upon what kind of people we turn out to be. Ask any libertarian.

We have a new symbol of our national character. Out with the eagle, out with Uncle Sam. Fittingly, this new national symbol was unveiled this weekend in Detroit. Where else?

What is this updated icon of America? It’s a nine-foot-tall bronze statue of Satan, of course, complete with horns and a pair of little children looking up at him adoringly.

Some say this idol ought to have been set up at the White House, or on Capitol Hill, or the steps of the Supreme Court. All in good time. Is there any doubt that those locations have already been sealed off from Jesus Christ? But Detroit is a much better match, symbolically. Its ruined public buildings, its filthy streets, its crime, its inadequate and failing grasp of law and order—this is what the kingdom of Satan looks like, and this is what all America will look like once his stooges are done with us.

The Satanists who put up the statue say it “will serve as a call to arms from which we’ll kick off our largest fight to date in the name of individual rights to free exercise against self-serving theocrats.” What do they mean by that? Search me. Anyone who can unravel that statement ought to win a year’s supply of birdseed. I mean, are these people really worried about “theocrats”? Does it look to them like “theocrats”—we presume they mean Christians—have been winning any battles lately? We powerless Christians couldn’t even stop the Supreme Court from saying a man can marry a man. We can’t even get Planned Parenthood defunded after they’re caught on videotape bragging about how they sell of bits of butchered babies. So what threat does anybody pose to the Satanization of America?

The Satanists also say they’re really big for “separation of church and state,” a doctrine found nowhere in the Constitution or the Declaration of Independence. What this actually means is that the apparatus of the state is to be used to hammer Christianity. It establishes “non-religion” as the de facto religion of the government at all levels, and has been a highly effective tool for eradicating Christian influence on public policy.

Anyhow, it’s time we had great big statues of the Devil in all our major cities. We might as well be honest about who we are, or who we’re turning into. It’s not all dead babies and bizarre substitutes for marriage. It’s the little things, too—like inattentive employees who can’t be bothered to give you what you’ve ordered and paid for, passersby who dump their fast-food waste into other people’s garbage cans, and whoever they are who walk their dogs and leave little bags of dog-poo all over the place.

Don’t think that Old Nick is interested only in explosive, epic works of evil. These are splashy, and he likes them just fine, and every time he wants one, all he has to do is mosey over to the Supreme Court and ask for it. But he is also fond of nagging little nips of evil, the kind you hardly notice individually but which, over time, build up into an unbearable weight of frustration and resentment. For instance, when he gets some feminist with The Washington Post to write that air conditioning is a sexist plot against women it may a minor irritation, soon forgotten: but in the meantime it stirs people up over nonsense and arouses anger and annoyance that would otherwise not have been created.

And would you believe that last line landed me on a word count of 666?

2 Responses to What’s left of our national character?