Posted By Marsha West on March 13, 2017 in Discernment, Entertainment
Share

“For close to a decade, a few discerning Christians have been warning about The Shack,” says Gideon Knox. “Unlike other books that are equally as bad, this one even attracted the ire of more prominent men like [Albert] Mohler and [Tim] Challies. And yet, few listened.” Dr. Mohler charged that the book contains “undiluted heresy.”  And he’s right. There are 13 heresies in the book.  Even so, a large number of professing Christians read the book and had no problem recommending it to friends and family.  Putting aside the controversy over the book, they rushed to theaters and filled their mouths with popcorn while enjoying Hollywood’s trashing of the Trinity on the silver screen.

Thanks largely to those who claim to follow Jesus, the movie’s a box office success.

In his piece over at Pulpit & Pen, Gideon Knox argues that discernment within the church is not vigilant and it must be. With this in mind, he has some excellent advice for pastors and church leaders.  He writes: 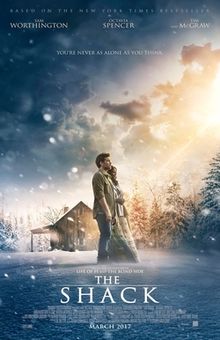 While we should be thankful for the plethora of warnings about The Shack that have been published in recent weeks, there is still a cause for concern in Zion. Pastors and concerned laypeople have done an admirable job, by my estimation, of sharing articles on their social media pages, providing a polemical view of both the movie and the book. And even if the articles don’t include the word polemical, they nonetheless are, and they are obligatory warnings for our friends being carried away by the novelty and sensuality of a cinematic, modalistic, patripassian, whore-god who is an imaginary graven image of Yahweh, created and promoted by the money changers of the Christian book industry.

Idolatry and blasphemy are two sins loathingly detested by God Almighty, and the Commandments which The Shack gratuitously breaks include imprecatory promises like, “You will not take the name of the Lord thy God in vain, and I will not hold guiltless those who take my name in vain” and “You shall not make for yourself any graven image…for I am a jealous God, punishing the children for the sin of the parents to the third and fourth generation.” There is little more execrable to the Almighty Deity than crafting a perverse idolatrous image of him and selling it for profit, except for perhaps the odious insult of blaspheming his name by titling the image “Jesus.” Hopefully, most of the anti-Shack polemical pieces made clear in one way or another that The Shack is infinitely more offensive to God than 50 Shades of Grey. One abused the Image of God, and one turned God into an abusive image.

The fact is, however, such last-minute warnings about these heretical injections into our evangelical bloodstream simply are not efficacious alarms and do little to stem the tide of mass acceptance of the cinematic or literary errors. As grateful as I am for Christians far and wide who did their best to warn their loved ones about The Shack, it wasn’t enough and won’t be enough in the future, when Hollywood teams up with Belial to capitalize on the popularity of evangelical rat poison.

The Shack came out as a self-published book in 2007 and was quickly carried upward by what I suspect was the Midas touch of the god of this world, and became a New York Times Best Seller, with over a million copies sold by 2008. Like dime-bags of coke on an inner city playground, the book was sampled and snorted by churchmen all across the country, being passed through Sunday School groups and ladies Bible studies as spiritual contraband and nobody seemed to notice or care. Or, I should say, not many seemed to notice or care. Polemics and discernment ministries were giving sound warning, as well as at least one prominent evangelical leader – and they were doing so years ago. In fact, the earliest polemical review of The Shack that I have found is from the late Ken Silva in 2008,  years before Albert Mohler gave a salvo through his much louder megaphone in 2010. And to the credit of Tim Challies, he was also one of the first to critique the book and call it out as “quietly subversive” and “set on undermining orthodox Christianity” also as far back as early 2008.

For close to a decade, a few discerning Christians have been warning about The Shack. Unlike other books that are equally as bad, this one even attracted the ire of more prominent men like Mohler and Challies. And yet, few listened. Pastors turned their eye to the book being passed around their small groups like a peace pipe at a powwow. They ignored the warnings because only a few people in the congregation were advocating for the heretical diatribe. After all, one million books sold out of 75 million evangelicals doesn’t seem like a lot – that’s only about one copy of The Shack for every medium-sized evangelical congregation in America. The threat seemed so much smaller then, almost insignificant, and patently trifling. And now, The Shack has made over 16 million dollars in its first weekend box office, exposing ten million more people in over 2,200 locations to the non-Christian anti-god of William P. Young’s imagination.

And how have the bulk of evangelicals responded to the profit-mongering march of the Christian book industry into Sodom, pitching their tent towards the fictionalization of Hollywood’s god? By and large, they have responded to the culmination of a decade’s worth of building popularity of a highly heretical novel on the opening weekend of its box office debut with Facebook posts.

Surely you can see the problem.

Discernment within the church must be vigilant. We can’t keep up the last-minute strategy of posting impromptu discernmenty Facebook posts, which are a decade late and 16 million dollars short. Instead, consider these things:

1. Your pastor and church leaders need to regularly read the work of dedicated polemicists to know the threats to their church before it hits Hollywood and already has a fan base in your congregation. We shouldn’t expect the typical pastor to be a polemics guru, but there are polemics experts out there that are already on top of it.

2. Your church needs to have an environment where discernment is okay. Maybe it’s at the beginning of Sunday School or during announcements on Sunday morning. It needs to be okay for your pastor to say, “Hey y’all, I know some of you have heard about this best-selling book, but it’s bad and here’s why.” It needs to be cool to pull aside the lady’s Bible study leader and say, “We need to talk about you endorsing such-and-such book, because that’s not cool.”

As we get past The Shack, it would be really helpful if we evangelicals could decide how to prevent the prostitution and corruption of our Christian doctrines being marketed to us like flesh, rather than just warning people after it’s too late.

The Progressive Disease of Spiritual Deception in Our Time
Leaving the NAR Church: Angela’s story

One Response to Post-Shack Christianity: The Lesson We Must Learn About Vigilant Discernment