In a piece over at Pulpit & Pen, Bud Ahlheim gives us a glimpse of “rock star icon of the Emerging Church” Rob Bell’s latest attempt to rewrite the Bible. In his new book, the former pastor of Mars Hill Bible Church in Grandville, MI looks at the Bible in a “fresh, new way.”

One of Rob Bell’s annoying traits is to ask questions in order to “drive his hearer to a pre-determined position,” says Ahlheim. “And, most often with Bell, that position has been known in the annals of orthodox Christian history as HERESY.”  So with this in mind, would it surprise you to learn that in 2011 Rick Warren’s Saddleback Church used Bell’s heretical teaching?

But this is not about Rick Warren corrupting the minds of his congregants; it’s about what Bud Alheim refers to as “Bell-eneutics.” He writes: 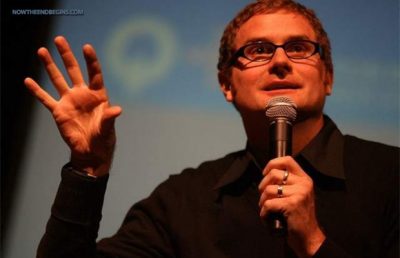 Check the batteries in your heresy detectors!

There’s a new Rob Bell book soon to be released.

I thought I’d warn you that, soon enough, your social media threads may be fuller than a tick on a hound dog’s buttocks with Rob Bell-isms and, hopefully, with the rightful, scornful rebukes his theology, so far, demands.

Bell’s upcoming tome?   It’s called What Is The Bible?   While it might seem cause for thanksgiving that Bell may have finally discovered the source of divine Truth in the written Word of God, such an epiphany on his part doesn’t seem all too likely. The book has a rather long subtitle that with a tone that tends, rather, to confirm that Bell’s traits of emergent, man-centered unorthodoxy haven’t necessarily been forsaken.

The subtitle is “How an Ancient Library of Poems, Letters, and Stories Can Transform the Way You Think and Feel About Everything.”  It’s a mouthful, to be sure, but because it’s bellowed by Bell, it tends to stimulate discerning theological taste buds with a face grimacing aftertaste of heretical, over-chewed, toxically-emergent cud that needs desperately to be spit out.

Bell’s Bible book is, according to Amazon, set for release on May 16, 2017. Amazon also notes it as the “#1 New Release in Christian Bible Study.” Hmmm.

Published by Harper Collins, a promotional book tour will commence on May 17. Notably, the tour locations are bookstores, not churches. Can we take this as a sign that the general book-reading public is becoming more Bible and faith-friendly? Or, can this be interpreted to mean that, though it’s a book about the Bible, it’s not one that would be welcomed in most churches?  Or, can we take the book tour locations purely at face value, a marketing attempt to engage the author with the public in order to generate promotional buzz that might translate into deposit-able funds?

Interestingly, the intrinsically irrelevant, but highly relational Relevant Magazine is poised to release a feature story on the Bell book in its May 1 issue. At least one teaser article has already been published there, with the shocking, at least to any abide-in-my-word disciple familiar with the apostate’s works,  claim: “Bell is an expert in the Scriptures …”  This doesn’t necessarily bode well for any hopes that Bell’s heterodoxy has suddenly become orthodoxy.

But it’s the book’s description on the Harper Collins website that gives an abbreviated microscopic prelude to the coming full-paged musings of Bell.

Rob Bell, the beloved author of Love Wins and What We Talk About When We Talk About God, goes deep into the Bible to show how it is more revelatory, revolutionary, and relevant than we ever imagined—and offers a cogent argument for why we need to look at it in a fresh, new way.

The use of the adjective “beloved,” to me, necessitates that the proper noun to which it is attached be a well-respected, fully-vetted, doctrinally-sound, Scripture-fixated orthodox church figure. Somebody like Spurgeon. Somebody like Jonathon Edwards. Somebody like a Puritan. But, mainly, somebody dead, whose works have been duly, ably digested under the lens of orthodoxy and found to be soundly reliable.  And, by virtue of their temporal absence, the “beloved” individual is thus free from creating for the church any potential doctrinal angst by saying, preaching, publishing, or muttering Scripturally inane things if they were still alive. So for Bell to be “beloved” seems to me an untenable stretch. But, hey, it’s the publisher’s website. They have a vested interest. Continue reading

Learn more about Rob Bell over at Apprising Ministries