Posted By Marsha West on May 12, 2016 in False Teacher Alert, Women and the Church
Share

For those who haven’t heard the news, Anne Graham Lotz was chosen to succeed Shirley Dobson as the Chairman of the National Day of Prayer.  To make it official something called a “prayer mantle of leadership” was bestowed on Mrs. Lotz.   You may remember that Glenn Beck recently received a “new mantle for the future” from NAR “prophet” Chuck Pierce.  And let’s not forget that Donald Trump received a “mantle of government” from a group of Christian luminaries that joined together to pray for The Donald in his Trump Tower office.  It would appear that receiving a mantle has become a really BIG deal for some evangelical celebs.

Bud Ahlheim of Pulpit & Pen exposed Ann Graham Lotz’s decidedly unbiblical teaching on prayer in LOTZ … Of Nonsense.  In a recent blog post (below), he cautions: “Lotz would do well to repent of the heretical techniques she employs and teaches, and return to a doctrinally-sound study of the Word, with obedience to it.”  One wonders why a woman who has been called on the carpet for her failure to teach sound doctrine (see links below) was chosen to chair the National Day of Prayer.

A woman who embraces the heresy of circle praying, itself borne out of Wiccan witchcraft, will be taking the helm of the National Day Of Prayer Task Force.

Pandering to the discernment-free and Scripture-disregarding, ecumenical efforts of the modern evangelical church, the false teacher Anne Graham Lotz will presumably be drawing circles around the entire nation as she mystically leads it to pray for “repentance, revival, and a recommitment to serious prayer.”

As reported throughout the religious news media, Lotz remarked on her blog that “I was not surprised to receive a call from Shirley Dobson asking me to succeed her … “  Lotz was not surprised, you see, because “God has called me to be a messenger.”  (Uh-huh. Sure, God’s gonna pick someone who uses pagan prayer practices.  Umm, no, prolly not.) 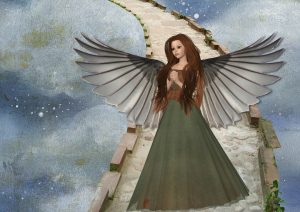 Messenger is not an ecclesiastic office noted in the New Testament. “We are ambassadors of Christ.”

Anyone familiar with Lotz’s less-than-orthodox practices (She gives “prophetic” words, too, FYI) may herein recognize yet further departure from God’s Word by the larger “evangelical” church.  As we know, the enemy may disguise himself as an “angel of light,” this time perhaps via Lotz’s self-monikered, anagrammatic AnGel Ministries.

“God has called me to be a messenger. I have used my initials, AGL, to name my non-profit ministry AnGeL Ministries because in Scripture angels are God’s messengers.”

While correctly identifying the divine use of angels as messengers, Lotz did not point out the important retention of her evangelically-hallowed middle name.  Were it not for that, it seems likely that this particular faith-threatening femme fatale might have a substantially more muted voice.  And that would be a good thing, since her handling of Scripture and her promotion of patently unbiblical teachings are spiritual poison.

No, God did not “call” Lotz to “be a messenger.”  God does not “call” anyone to be a messenger in the same way that He calls a prophet, or a pastor, or someone to any other established, Biblical office.  Instead, God “saves” us to be messengers. Messenger is not an ecclesiastic office noted in the New Testament.   “We are ambassadors of Christ,” remember?  So, in the sense of Him saving us, we are all called to be messengers.

Every believer is charged with the Great Commission.  Saints – all saints – do the work of ministry.  Lotz shoulders no unique, divinely appointed “messenger mantle.”

“And he gave the apostles, the prophets, the evangelists, the shepherds and teachers, to equip the saints for the work of ministry, for building up the body of Christ” Ephesians 4:11-12

Lotz’s “messenger-ship” office, though, is imbued with an overly spiritualized, ethereal mysticism when she compares it to the ministry of angels.  Did Lotz – whom her father called, according to Dobson in the Charisma news article, “the greatest preacher in the family” – just narcigete herself as an angel?

(That the elder Graham would call his daughter a “preacher” is a rather curious statement considering the gender-specific, apostolic teaching, “I do not permit a woman to teach or to exercise authority over a man; rather, she is to remain quiet.”  1 Timothy 2:12)

“It’s interesting to note that at the beginning of all things, in Genesis 1, God used prayer—the preparation of the Spirit hovering over the waters of a formless, empty planet, and the proclamation of His Word—and God said—to transform our world physically.”

(Important Scripture interpretation safety tip from John MacArthur: “Do not spiritualize the passage.  Interpret and understand the passage in its normal, literal, historical, grammatical sense, just like you would understand any other piece of literature you were reading today.”)

Instead of a logical and literal interpretation, Lotz suggests an esoteric meaning.  She is stating that prayer was God’s mechanism for the creation of the world.  HUH?  Did God draw a circle around nothingness and ask for the world to be made?  Is she claiming that God prayed to God for the creation of the world and that God answered God by doing it? (Here, friends, is an example of eisegetical violence being done to Scripture.)

The proper, orthodox interpretation of the creation story yields an introductory, fundamental, and staggering presentation of the sovereignty of God. (that’s a doctrine, by the way, though you may not hear about it in church these days)  Scripture teaches that God, in the fullness of all His divine attributes, SPOKE, and the visible creation that we see was formed “ex nihilo” – out of nothing.  Look it up.

No sound theologian, scholar, pastor, teacher or Scripturally-literate “messenger” will suggest that God was praying for the world to be created.  He spoke; it happened.  Continue reading

Anne Graham Lotz appeared on Word of Faith false teacher James Robison’s program. Robison was one of several word-faith teachers who met with Pope Francis at the Vatican.  “Robison has led several conferences with evangelicals and Catholics working toward an ecumenical understanding.” (Watch the Robison/Lotz interview)

“Another thing I do is to meet with God in prayer and Bible reading. Just like you need to strengthen your core physically with exercise, you also need to strength your core spiritually,” says Graham Lotz, 65, the daughter of evangelist Billy Graham and author of more than a dozen books including her latest, Fixing My Eyes on Jesus.

What she’s describing is contemplative/centering prayer.

See our White Papers on Occult-Sorcery and Contemplative Prayer